Soft fruit from the Iberian peninsula and Morocco is becoming increasingly important. Thanks to investments in production, volumes have increased, and more importantly, seasons have been extended. A year-round European season is within reach for many products. Ben Maes from Special Fruit explains that choosing the right varieties is important. For example, Calinda for strawberries and Kwanza for raspberries are good varieties, although the lack of good varieties is halting the growth of the blackberry segment.

Outside of the Dutch and Belgian season, Special Fruit imports much soft fruit from Spain, Portugal and Morocco. By spreading import over these countries, supply is guaranteed for seven months of the year. “Because we plant at various moments,we have Calinda in production for seven months,” Ben says. Special Fruit carries the Calinda strawberry variety in its range for the Southern European season.

Portugal enters the market first with this strawberry. This season starts in week 44, although volumes are still small then. The Moroccan season starts in December, and volumes increase. Large supply starts when Spain enters the market late-December, early-January. The core of production is clearly on Spain. Huelva is good for 80 to 90 per cent of Calinda supply. “In total, our growers planted 11 million plants for the coming season,” Ben describes the size of the production. “That is 40 to 50 per cent more than last year, and we’re good for about 60 per cent of European production.”

The heat wave that hit Southern Europe last summer doesn’t affect this year’s soft fruit production. The strawberries were planted after the heat wave. During the growing stage of the plants, weather is a decisive factor for the start of the season. “When the plants are growing, between October and December, the weather decides if the season starts early, normally, or late.” During the harvest, the weather also affects flavour.

“It’s the strategy of countries in Southern Europe to start as early as possible,” Ben explains. “So they are looking for varieties that are good, qualitatively.” That means a variety has to look well, and flavour has to be good enough to convince consumers. However, the variety also has to be resistant against diseases, and has to have a good shelf life. “Calinda is a variety that meets all those requirements,” Ben says. “Calinda has three strong points that we put a spotlight on.” Firstly, that means flavour, which is better than that of conventional varieties grown in Huelva, according to Ben. Secondly, Ben mentions a good shelf life after the harvest. Finally, he says the strawberry has a good appearance.

Special Fruit has had Calinda in its range for five years now. The variety is supplied throughout Europe now. “Strawberries are no longer a seasonal product, but consumption isn’t at the same level everywhere. With a good product, we can increase consumption.”

“In the past, Spanish strawberries didn’t always have a positive image in the Netherlands and Belgium, because quality and flavour weren’t always good,” Ben continues. “You can then see more and more parties looking for other varieties, because they want a certain guarantee. I think that what we’re doing with Calinda, and what other companies are doing with other varieties, is making the image of Spanish fruit a bit better.” According to Ben, Spanish and Dutch strawberries are two separate products that don’t compete with each other. “The Dutch winter production mostly consists of Elsanta. That variety can’t be compared to Spanish strawberries,” Ben explains. “It is worth it for retailers to offer the Spanish strawberries to consumers. In the end, it’s important for supermarkets as well to have a reliable product for which consumers return. We can guarantee that.”

The soft fruit market is growing in every aspect. “Price is naturally important for consumers, but flavour comes first,” Ben says. “The product has to have a good flavour, and offer a good experience. It’s our job, and that of retailers, to select a good variety that’s just right.” Besides Calinda, Special Fruit works with the raspberries of Kwanza. “We’ve seen serious expansions of Kwanza in Portugal, and we’ve received positive signs from retail chains,” Ben says. The Belgian company currently sells the yield of about 130 hectares.

Blackberries falling behind in growth figures

“We have a permanent partner in Huelva for blackberries,” Ben continues. The area of this grower increases annually, even though it’s a small market. That’s mostly due to the available varieties, Ben explains. To make blackberries successful, the fruit has to have a good shelf life and a good flavour, he emphasises. “Blueberries and raspberries are growing the fastest. Blackberries are definitely growing, but not at the same speed. It’s a product for which we’re still searching for suitable varieties in terms of flavour and shelf life.”

Once that variety is found, the market will definitely grow quicker. Transport is a bottleneck, because not all blackberry varieties are suitable for transport. “That naturally also plays its part for strawberries and raspberries, but companies have been looking for new varieties of these products for longer now. For blackberries, they’ve only just started.”

Blueberries grow fastest within the segment. “Morocco is earlier and earlier every year, the season starts from November, and lasts until May or June,” Ben continues. “After that we switch to Huelva and Portugal, which are mostly grown for the late season, when seasons in the rest of Europe have actually already finished.” These two production regions are just ahead of the Dutch and Belgian season.

With that considerable growth in production, focus is on a longer season. Traditionally, Huelva starts in April and the season lasts until June. Nowadays, the season starts in December or January. The Moroccan supply is even earlier, in October and November. “Because of seasonal extension, Southern Europe has a larger market share,” Ben says. “That’s partially at the expense of the market share of Latin American countries, but the market is growing so quickly, that the growth is in line with production.” Ben doesn’t just mention the fact that consumers buy more berries, but also that packagings are becoming larger and consumers therefore buy more than in the past.

From a logistical point of view, the rising production in Southern Europe has many advantages. Transport time is considerably shorter. “Special Fruit cares about the environment and the impact of logistics on this. That’s why we always try to grow fruit as close to the market as possible.” Overseas hasn’t been sidetracked because of this. These countries are necessary to achieve a year-round programme, and from a strategic point of view, these countries are important. Spain and Southern Europe are becoming increasingly important, but for now, this isn’t at the expense of production areas overseas. 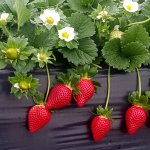